The Tragedy of Judge Bill Asher (Work-In-Progress): an absurd legal drama about wildfires, bribery, and fairies.

The Invisible Parade on Polk Street (2017): A weird literary novel told by an unlikable and unreliable narrator named Ghin, who is lying in bed in a coma and using a computer to transcribe his thoughts. Ghin has lost the first three chapters of his story and he isn’t sure how he ended up in a coma, but he thinks it all started the week before at Shorelake Golf Course where he witnessed a murder along the club’s 10th fairway.

The Man Who Built a Purple Pool (2014): College-bound Tom Cochrane isn’t rich enough to place his sister on America’s twelve organ donation waitlists, so he quits school and takes a job as a carpenter in Las Vegas, sending his weekly paychecks back home, hoping to make enough to add her name to each list. Unfortunately, Tom’s paychecks aren’t coming fast enough, and his sister is getting worse, so he turns to what he thought should be his last resort: gambling. 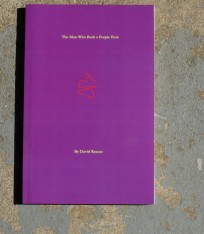